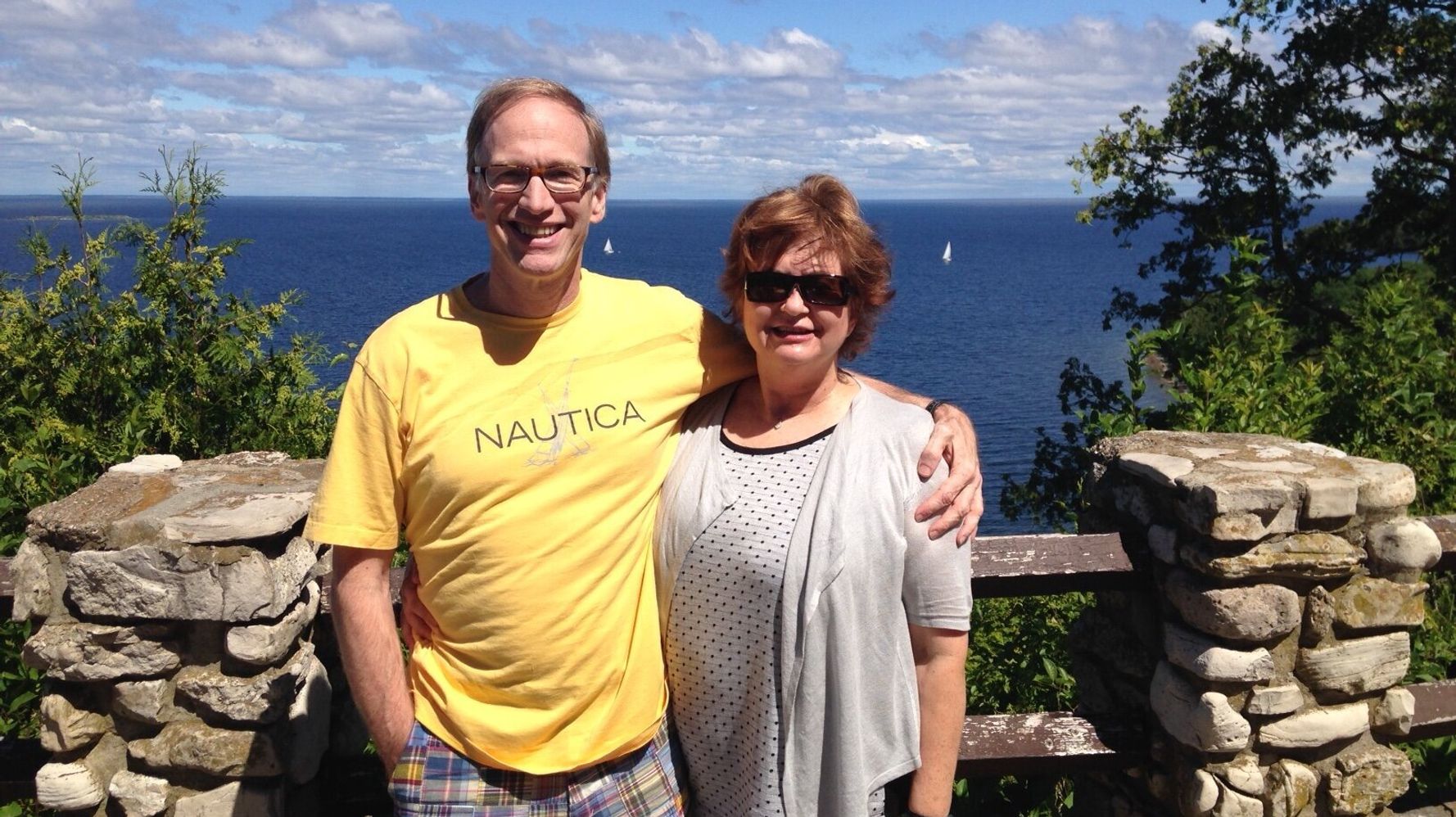 We both remember the Great Tomato Soup Incident of 2012 as a touchstone.

My husband, Rob, had thoughtfully asked if I wanted anything from the grocery store.

“Hmmm,” I pondered as I watched TV. “Soup, I guess. Some kind of chicken-y soup. A chicken broth kind. Not creamy. You know, like chicken noodle or chicken rice. Or that kind with the little meatballs. What’s it called? Italian wedding!” I was rambling, but this was before we knew.

I kept riffing on soup. “Chicken vegetable. Oh, does that have peas in it? I don’t care, really. Anything that is chicken broth-based is fine. Anything but tomato soup.”

Half an hour later, Rob walked back into the house and innocently handed me two cans of tomato soup.

Lest you think this is just another example of Men Who Don’t Listen, it’s not. My husband was confused by my subsequent outburst. He genuinely thought I had said I wanted tomato soup.

A can of soup may be inconsequential, but Rob often failed to comprehend conversations about consequential issues. A few years into the relationship, we seemed to be fighting a lot. It’s not like we were both young and naïve. Both of us were middle-aged and previously married with grown children. But I was totally frustrated by this sweet, funny, smart and kind man who did not have the capacity to pay attention. Or to make eye contact. Or interact socially.

One night we were cuddling on the couch, binge-watching the TV show “Parenthood.” In the show, a preteen boy named Max is diagnosed with Asperger’s syndrome. He is bullied at school for his oddness but eventually thrives at a school for kids outside neurotypical norms.

But young Max was not the “aha” moment for my husband. No, that honor belongs to an adult character in the show played by Ray Romano, a photographer named Hank, nice enough, but who comes across as socially awkward and clueless. After befriending young Max, Hank reads a book about Asperger’s in order to better understand the boy. The TV audience sees a wide-eyed Hank turning pages rapidly, underlining passages. A lightbulb practically appears above his head. The traits listed in the book also apply to him. He realizes that he, too, has Asperger’s!

Rob clicked off the TV and stared at me. “Do I have Asperger’s?” he asked.

Truthfully, it had occurred to me that something was amiss, but he had bristled at my previous attempts to analyze him. Seeing it portrayed on TV made something click.

How could it be that Rob remained undiagnosed until well into his adult life? Probably his parents or teachers weren’t savvy about such things way back when. He was thought of as a smart but difficult child. The small tells of his condition were written off as quirks. In fact, when Rob and I first began dating, a girlfriend said to me, “I heard he’s a nice guy, but kind of quirky.”

Actually, the word “Asperger’s” is not the preferred terminology these days. Technically, Rob is somewhere on the autism spectrum, on the not-so-obvious end. Here are the characteristics of Asperger’s most apparent in my husband: lack of eye contact; preference for routine; struggle with social interactions; literal understanding of words; hyperfocus on one idea, sometimes obsessively; exceptional verbal ability, especially vocabulary. This last one feels like an outlier in the list, but it is true of most Aspies ― a fact that explains Rob’s success at his first career ― radio.

I heard Rob before I ever knew him. He was the popular morning show host at a local radio station. I often laughed aloud at his witty, articulate on-air banter as I listened in my car. So I was confused when I began dating him because he seemed like a different person. I chalked it up to nerves at first. But, no. His real self was a far cry from his casual on-air persona.

“Why is he so garrulous and charming on the radio but shy and bumbling in person?” I wondered. Later, I realized he didn’t have to LOOK at anyone when he was in the studio. I’d frequently chide him for not looking at me during conversations.

Any type of social interaction is strained for Rob. His “deer in the headlights” expression at large gatherings where 12 people are talking at once could be interpreted as aloof or maybe dull. He just can’t process the cacophony of words coming at him.

Rob fretted that he was not making a good impression on my sons. Once, after he told me a clever joke, I suggested he tell it to my oldest son, Jeff, since we were attending a dinner party at his house that evening. Rehearsing and planning conversation is a suggested tool for Aspies.

As Jeff opened the door to greet us, Rob blurted out, “Here’s a good joke,” before either of us had crossed the threshold. He proceeded to tell the joke rapid-fire, amid removing coats and welcoming hugs. I’m not sure my son heard it.

I sympathized, wondering how long Rob had rehearsed and if he was disappointed that his big moment was over before we’d entered the house. Though he understands that conversations have an ebb and flow where he might naturally tell a joke, he is unable to figure out where that place is.

His lack of observational skills is also legendary. Once, after we had just moved to a new place, I asked him to help me hang pictures in the living room. “Later,” he said. “Let me finish this.” He was intensely focused on the computer screen in his office. Feeling impatient, I just did it myself.

Exactly three weeks later, he suddenly turned to me and said, “I can help you hang those pictures now.” Are you kidding? I thought. I’d hung five large pieces of art around the room.

“Uh, look around the room,” I said. He did. He didn’t get it. “What am I supposed to see?” he said. He hadn’t noticed for three weeks that the living room no longer had bare walls. He is capable of noticing, however, minuscule details, like that there are fewer pixels in one of two seemingly identical digital images.

So what counters all this frustration? What makes the relationship work? A lot. We’re both avid readers of everything from popular fiction to complicated philosophy. We text each other funny observations during the day. We try new restaurants on the weekend, though I am usually the one who has to push for culinary experimentation. We are good traveling companions; once we took an impulsive detour to Bruges on our way to Amsterdam because we loved the movie “In Bruges.” We can sit silently in the same room, staring at our iPads, playing Words with Friends with each other, and not think it’s weird. We share the same political views. Most importantly, we laugh easily and often. A good sex life doesn’t hurt either.

Still, I’m not sure we’d still be married if Ray Romano’s character hadn’t practically reached out of the TV and tapped my husband on the shoulder. Suddenly everything made sense. Those behaviors that neurotypical people, like me, found so annoying were the result of different wiring in his brain.

Moreover, Rob looks at himself differently now. Knowing was a huge relief. He doesn’t have to think of himself as a socially awkward, unaware, hyperfocused yet easily distracted doofus. He has Asperger’s. His brain doesn’t work the way mine does. He can learn new helpful skills, but they will never be natural to him.

I, too, must learn new skills that help us connect better. Rob left radio and now is a respected radiology tech in an orthopedic operating room. He says he chose radiology because it appealed to his sense of order and routine; I say he chose to work in surgery because all his patients are anesthetized. He still has to interact with his co-workers, though, and is often confounded by failing to grasp the nuance of a conversation.

These days, if he asks what kind of soup I want, I say succinctly and precisely, “Progresso Chicken and Dumpling Soup, please.” I might even write it on a piece of paper. Or text it to him. I’m still apt to ramble, but I can’t really fault Rob for having no idea what I’m rambling about.

And sometimes, when I want a face-to-face, focused conversation, I only need to say two words: “tomato soup.” He gets it.

Do you have a compelling personal story you’d like to see published on HuffPost? Find out what we’re looking for here and send us a pitch!