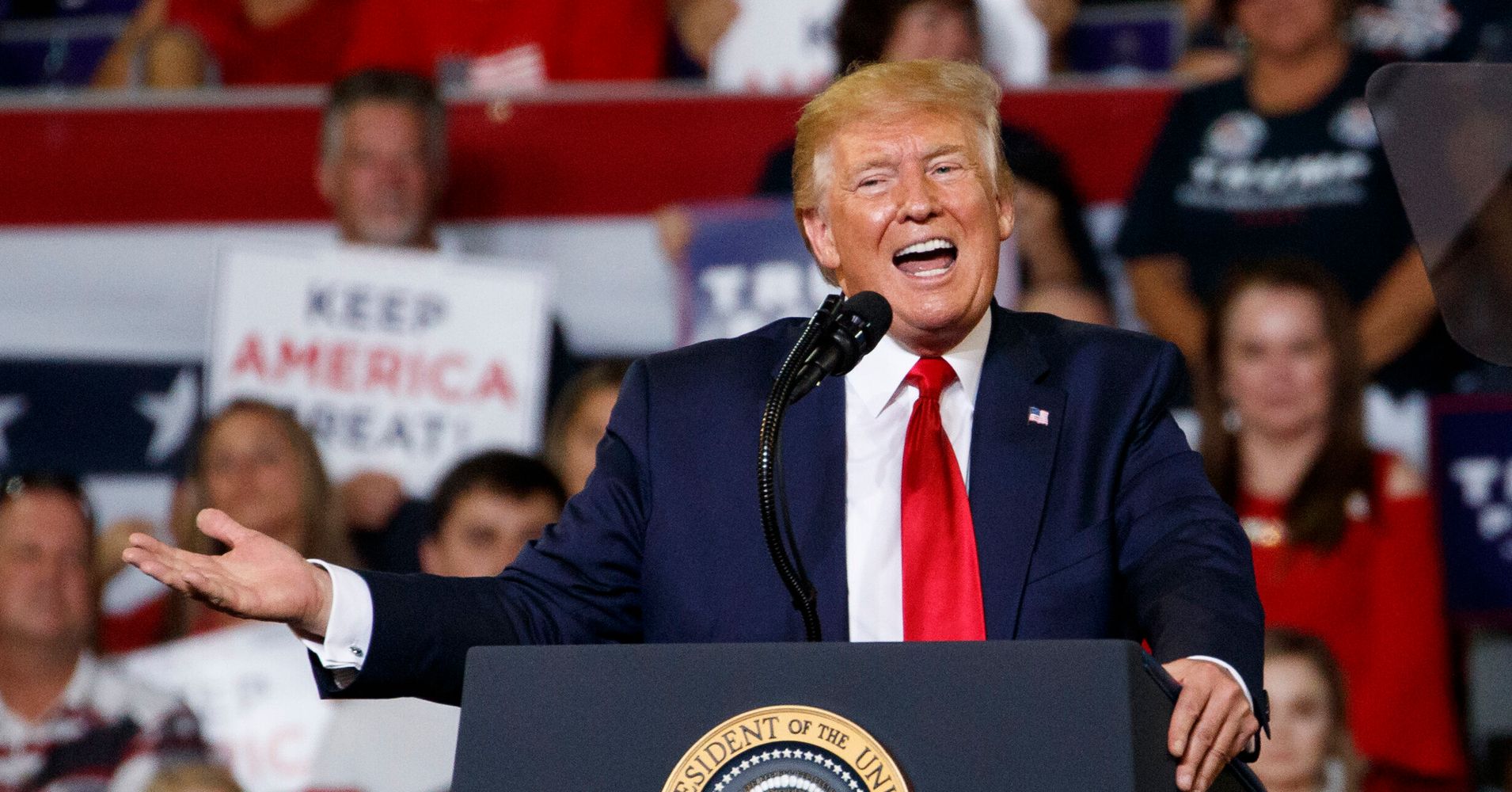 Greenville, N.C. ― President Donald Trump renewed his attacks on four freshman Democrats in Congress, all women of color, saying that “if they don’t like” America, “let them leave.”

“I have a suggestion for the hate-filled extremists who are constantly trying to tear our country down,” Trump said at a rally for his reelection campaign in North Carolina on Wednesday after finishing a long diatribe naming Democratic Reps. Alexandria Ocasio-Cortez (N.Y.), Ilhan Omar (Minn.), Ayanna Pressley (Mass.) and Rashida Tlaib (Mich.).

“That’s why I say: If they don’t like it, let them leave,” Trump said. “If they don’t love it, tell them to leave it. I’m just saying it’s their choice, they can come back when they want.”

“I think, in some cases, they hate our country,” Trump added, doubling down on similar remarks he’d made earlier this week. “And they’re so angry.”

Earlier this week, the president tweeted a racist rant clearly aimed at the four lawmakers, saying they should “go back and help fix the totally broken and crime infested places from which they came.”

All four are American ― and all are women of color. Only Omar was born outside the U.S. The next day at a White House event, Trump reiterated his comments, railing against the congresswomen as “people who hate our country.”

Amid a public outcry, House lawmakers approved a resolution in a contentious vote on Tuesday to condemn Trump’s words as racist.

As Trump named each of the congresswomen at his rally, the crowd loudly booed. In response to his remarks about Omar specifically, people launched into chants of “Send her back!”

Trump repeated his previous attacks against Omar ― one of the first Muslim women in Congress ― saying she “has a history of vicious anti-Semitic attacks” and that she “minimized the Sept. 11 attacks on our homeland, saying ‘some people did something.’”

Omar has faced controversy since she came into office for questioning the U.S. relationship with Israel, comments some painted as anti-Semitic. The president was also apparently referring to a misleading video he tweeted in April, splicing together comments Omar had made with footage of the Sept. 11 terrorist attacks. The video pulled a single line from a roughly 20-minute speech Omar gave, saying: “[The Council on American-Islamic Relations] was founded after 9/11 because they recognized that some people did something, and that all of us were starting to lose access to our civil liberties.”

After Trump attacked Omar in April as “ungrateful” and “anti-Semitic,” the congresswoman received death threats.

Of Tlaib, also one of the first Muslim congresswomen, Trump said at the rally that she “used the F-word to describe the presidency and your president.” (He was apparently referring to Tlaib having said: “We should impeach the motherfucker.”)

“With the big, fat ― vicious the way she said it ― F-word. That’s not somebody who loves our country,” Trump said.

When Trump mentioned Ocasio-Cortez, his crowd of supporters booed loudly.

“[Vice President Mike] Pence went down and looked at these so-called horrible concentration camps. They said, ‘Wow, these places … have air conditioning, they have water,’” Trump said. “These people come from rough places. Some of them said, ‘We’ve never lived like this before.’ They have water, air conditioning. Her talking about drinking water from toilets, which was a lie.”

Earlier this month, Ocasio-Cortez and other members of Congress visited migrants held in detention centers in Texas. The congresswoman said that women in a detention facility in El Paso were in cells without water and at least one said officers told her to drink out of the toilet. She condemned the horrific conditions in the detention centers, calling them concentration camps.

“Cortez ― they said that’s not her name, I said, I don’t have time to go through three different names, so we’ll go with Cortez,” Trump said of the New York lawmaker.

And to Pressley (whose name was also greeted by loud boos from the crowd), Trump claimed, “she thinks that people with the same skin color all need to think the same.”

“She said, ‘We don’t need any more brown faces that don’t want to be brown voices. We don’t need black faces that don’t want to be a black voice,’” he said, apparently referring to remarks Pressley made in a speech at the recent Netroots Nation conference calling for representatives in elected office to speak out on issues facing marginalized communities.

Before Trump spoke, the vice president addressed the rally. Though Pence didn’t mention any of “the Squad” by name, he seemingly referred to some of their remarks, decrying “radical Democrats who accuse Border Patrol of running concentration camps, use anti-Semitic slurs to denounce support for Israel, and continually attack America.”

A couple of hours before the president arrived at the rally, Thomason Lawrence, a 20-year-old in a red MAGA hat from Harker’s Island, North Carolina, stood beneath the stage where Trump would speak.

“He coulda worded it differently,” Lawrence said of the president’s tweets about the four congresswomen. “But if someone doesn’t like being in this country, then they should leave. If you’re in a restaurant, and you didn’t like the restaurant, you get up and leave.”

Lara Trump, daughter-in-law of the president and an adviser to his 2020 reelection campaign, addressed the crowd in Greenville about an hour before Trump spoke, saying: “If you don’t love our country — the president said it…”